The following is a tutorial for setting up the interface from the Shipping Solution to Starship via the Starship Developer Interface.

Note: The Starship Developer Interface replaces the older ADE interface which is no longer supported by Starship or Cadacus, Inc.

Below is a short video tutorial about setting-up the Starship tab of the Shipping System Interface.

NOTE: Chrome or Firefox is recommended for viewing video tutorials as skip controls are more effective than those in IE or Edge.

Download the Starship files in zip form here and unzip into a directory on the workstation.

The "STATION" number parameter must be unique for each Starship workstation. The "Path" must be a directory where the interface files can be read and written and must match the path in the SFSConfiguration.xml file as indicated below. Note:  directory paths used MUST NOT include a space anywhere in the path name.  When the path is added to the StarShip.ini file, it must include a trailing backslash ("\") at the end.  For example, the "Path" line in the StarShip.ini file might look like this:
Path=S:\Syspro\Starship\

Edit this file and change the three elements with paths as directed by the comments.  The "StarShip Input Path" and "StarShip Output Path" must be the same path and must match the path in the Starship.ini file.  Note:  directory paths used MUST NOT include a space anywhere in the path name.

The paths in the "Field List" and "Default Map" elements must indicate where the following two files will be located.  It is recommended this be the same folder as the SFSConfiguration.xml file.

This file contains the field list sent from the Shipping Solution to Starship.  DO NOT MODIFY THIS FILE.

This file contains the field mapping for the Shipping Solution to Starship.  DO NOT MODIFY THIS FILE.

Start the Starship client and change the source interface using the options show in the following menu tree.

Install the configuration by choosing, "Source Interface--> Use Source--> StarShip Developer Interface" from the menu.

Choose "Add Company" on the following screen and then browse and select the "SFSConfiguration.xml" file previous stored on the workstation in the next dialog box as shown below. 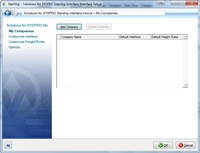